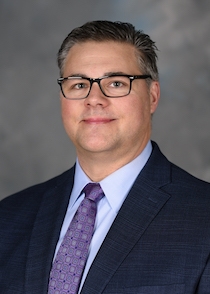 Mark Smith, MD, ’91, is the Senior Vice President of Medical Affairs/Chief Medical Officer of Henry Ford Allegiance Health, and the Chief Executive Officer of the Henry Ford Allegiance Medical Group based in Jackson, Michigan. He is a part of the executive team that drives strategy, quality, and vision for the health system and employs, recruits, retains, and leads over 140 providers who work for the medical group.

Dr. Smith is an advocate for opioid reform at the state level and has helped write prescribing guidelines for Michigan physicians. He is passionate about identifying disparities in health care and the effect social determinants have on the health of a population, such as economic stability, physical environment, education, and access to healthy food. In Jackson, he has helped develop a Health Improvement Organization which works to define what social factors drive costly care, with the goal of improving the cost of care and therefore the health and well-being of the community.

Inspired by his mother, a nurse, to pursue a career in medicine, Dr. Smith chose to attend Grand Valley because he knew it would prepare him well for medical school. He earned his bachelor of science degree in biomedical science in 1991, after four years of success in the classroom and on the football field. Receiving a scholarship to play football, Dr. Smith played all four years that he attended Grand Valley and earned GTE Academic All-America recognition his last two years.

After graduating from Grand Valley, Dr. Smith attended Wayne State University Medical School from 1992-1996. After medical school, he completed a three-year residency in emergency medicine at the Grace Hospital/DMC program. During his last year of residency, Dr. Smith was elected by his peers to be the Chief Resident, an experience that inspired him to include the administrative side of medicine in his career.

During Dr. Smith’s career, he has served on the Board of Directors of the Michigan College of Emergency Physicians, was awarded fellowship in the American College of Emergency Physicians, and was instrumental in collaborating with elected leaders to finalize the Medicaid two-tier payment model for emergency physicians. He has also volunteered at the University of Detroit-Mercy student clinic, supervising PA students and providing medical directorship of their clinic.

In 2019, Dr. Smith received the Distinguished Alumni Award. The Grand Valley Alumni Association presents the annual award at April’s commencement. The award goes to an alumnus or alumna who excels in their chosen profession and reflects favorably upon themselves, their community, and the university.


Page last modified March 25, 2019
Report a problem with this page